Late October: another spooky Halloween looms on the horizon like graveyard mist. With it comes a heady anticipation for candy, bad movies, fun costumes, and that special spark of nostalgia.

But some of us have memories a little less innocent than this. Some of us have an inner rebel; a scandalous ne’er-do-well who laughs in the face of things like “authority” and “rules.” Perhaps what we really love about Halloween isn’t the pageantry, traditions, or candy, but the mischief. The pranks. The EGGS.

If you grew up in New Jersey, as I did, then you already know what I’m talking about: Mischief Night. October 30th. Devil’s Night, to some. Goose Night, to others. The most baffling name of all is Cabbage Night, but where I’m from, we just call it Mischief Night.

On this night, the Eve of All Hallow’s Eve, one is expected to trick rather than treat. The minute the sun goes down and the streetlamps turn on, the empty streets echo with the sound of wicked laughter, cracking eggs, and footsteps beating a hasty retreat. Nobody is safe; they get to all of us, eventually.

If you find yourself in the crosshairs of a mischievous middle school bully with a carton full of jumbo eggs and the best arm on their Little League team, what will you do? Will you grumble and complain and swear to track down the brat’s parents? Or will you be prepared? Below, I will go over all the most popular pranks in the trouble-maker checklist and how you can recover from them.

How to Clean Toilet Paper From Your Home and Yard

Throwing toilet paper may seem like a relatively harmless prank, at first. It’s just some paper, right? You could tear it down in a few seconds. What’s the worst they can do, use two-ply? 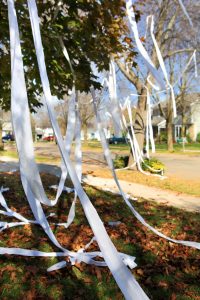 Then it rains. Oh, the terrible, terrible rain. It cakes the toilet paper and turns it into a nearly impenetrable cement that adheres to your home and refuses to be removed. Then you have to spend the better part of the week scraping 600-foot long ribbons of papier-mâché from the side of your house.

But this is just a worst-case scenario. The solution for dealing with getting TP’d is simple: act fast. It’s actually easy to remove, as long as it’s dry. A long rake or extended paint roller should give you access to those hard-to-reach places. A leaf blower works even better. Morning dew, a pleasant image for poetic metaphors and desk calendars, will actually pose a minor obstacle. Wait until late in the morning before you work, so that the environment will be dry.

Believe it or not, some numbskulls will tell you to light the paper on fire. Actual fire, as in combustible energy. They will tell you to take this fire, and then, apply it to your home. “It will clear up the toilet paper easily,” they’ll tell you. “It worked for me!” Suffice to say, they are buffoons. Do not, under any circumstance, light your house on fire. I shouldn’t have to say it, but here we are. This is an urban myth that will turn your home into a pile of cinders.

How to Recover From a Ding-Dong-Ditch

Ah, the Ding-Dong-Ditch, known in other circles as Doorbell Dixie, Ring and Run, Nicky Nicky Nine Doors, and Knock Knock Ginger. This is the prank of choice for less imaginative children, or at least those who’ve run out of toilet paper at home. The ruse is simple: Approach the doorbell. Ring the doorbell. Run away from the doorbell. If the prankster does it right, they’ll be gone long before you answer, leaving you mildly inconvenienced as a result.

Melissa of Wenonah, NJ, is an old veteran when it comes to this prank. “Oh, we get those all the time,” she tells me. “So much so that my husband wants to install cameras. Last time it happened he stood outside all night and waited to see if he could catch them. He’s pretty sure it’s the neighbor kids.”

Melissa’s husband is just one of countless Americans plagued by the sudden insecurity and self-loathing that comes from suffering a well-executed ding-dong-ditch. It’s like fist fighting a swarm of bees or eating cereal with a fork. The harder you try to catch them, the more frustrating it becomes.

Take a deep breath. Look inward. Imagine a raindrop falling in a still pond. Some things are out of your control. War, famine, ding-dong-ditches. We are all but grains of sand in the vast desert of time. Do you really want to spend the money on a security camera? You’re better than these petty games. Rise above it. Go back to sleep.

How to Clean Eggs From Your House

As with toilet paper, cleaning a house covered in eggs is a race against time. When the sun hits and dries up that slime, you’ve got a monster of a project on your hands.

Fortunately, as long as you’re quick, simply taking a hose to the eggs will wash them off. Make sure not to use strong pressure, as it will just scatter the

yolk and shell debris across the side of your house. A mild pressure and warm temperature will do the trick. Avoid using hot water, since this will literally cook the eggs in place.

If you’re too late and the eggs have dried up, then you’ll need to apply a cleaning solution to the stains. Avoid using anything with bleach, since it will strip the paint from your house’s siding. Warm water and a cup of non-bleach laundry detergent will work best. Remove any shell flakes still stuck to the wall, rub gently, and your home will be as good as new in no time.

Of course, not all homes are lucky enough only to have to deal with the threat of stains. Richard of Marlton Lakes, NJ, reminisces fondly over his long-lost days of egg-throwing: “I threw an egg through a window one time, perfect arc right into the middle pane of a 9-pane square. I was just walking down the street, tossed it, and ran.”

Some shots are luckier than others, it seems. Fortunately, should you wake up to a broken window after Mischief Night, any local glass shop would be happy to accommodate you.

To his credit, Richard does feel a pang of regret. “Kinda didn’t think it would hit,” he told me. “Figures, right? At least it was just a garage window. I’m not an animal.”

How to Properly Identify a Flaming Bag of Poo

If you’ve ever watched any coming-of-age movie made in the ‘80s or ‘90s, you know what this prank is. For those of you returning from your rock on Mars, this prank requires that one bag of poop be set on fire and left on a victim’s doorstep. The victim, panicked by the flame, will stomp on it to put it out, only to find themselves with a foot covered in crap.

It’s a nefarious scheme, to be sure, and one that requires an uncanny amount of leg work and effort on behalf of the prankster. Thwarting their plan is a lot easier: if you see a fire, resist your instinct to put your foot in it. Examine the fire. Is it covering your whole house? If it is, re-locate immediately and call 9-1-1. However, if it’s localized entirely to one tiny paper bag that smells suspiciously of dog poop, then you have successfully identified the threat.

That covers the big culprits of the holiday, but there are many more minor acts of vandalism to avoid. It’s my hope that this article gives you some measure of relief from the coming shenanigans. Of course, these kinds of pranks aren’t limited to just Halloween. Mischief, after all, lives in the black hearts of all scoundrels and may be unleashed at any time, like so many dozens of eggs.

Eden, of Charlotte, NC, had never even heard of Mischief Night. “Is that a place?” she asked, perplexed. “There’s not, like, a night before Halloween where you run amok. You just do that on Halloween… or any night, really. Someone just TP’ed a house on my street the other day.”

The prank is the universal language of all rebels. Kids will, after all, be kids, and Halloween is their night. If you really want to avoid a foot covered in dog waste, or a house turned into an omelette, then here’s my final piece of advice: make sure you stock the good candy when they come around for treats instead of tricks. I’m talking about full-sized name-brand candy bars. If you give them boxes of raisins, a handful of erasers, or if you’re the kind of monster who gives out black licorice, then they will remember.

And they’ll be back.