Ah, the good ol’ days! A time of tradition, when tiny children dressed in flammable plastic Halloween costumes and wore vision-impairing masks on their faces. Their parents sent off in the dark to knock on strangers’ doors to beg for a treat, or to come up with a trick and earn said treat.

Halloween is a time for fun and merriment, but its origin and traditions stem from celebrating the dead and warding off evil spirits. Good times!

On one particular Halloween in the early ‘70s, I conjured up my own evil spirits by trying to navigate a curb while wearing a Raggedy Ann mask with ill-aligned eyeholes. I wiped out in the middle of the street, spilling my trick-or-treat booty. With no parents in sight, I scooped up my pillowcase full of tooth-decaying delights and moved along, bloody knees and all.

Stranger danger? Feh! We didn’t give it a second thought when Creepy Neighbor Guy came to the door in his tightie whities with his nasty old dog, threatening our Halloween-hyped lives. That man was going to give us candy! #1970skidgoals

According to History.com, the precursor to modern-day trick-or-treating was called “mumming.” In the Middle Ages, during the Celtic celebration of the dead known as Samhain, revelers disguised themselves and performed in exchange for food.

By 1000 A.D., Christianity was in full force. The Catholic Church declared Nov. 1 as All Saints’ Day and Nov. 2 as All Souls’ Day, yet another feast for the dead. During this time, the poor folks would visit wealthy homes and promise to pray for the souls of the homeowners’ deceased relatives in exchange for pastries referred to as soul cakes. Known as “souling,” this practice children took the practice over, soliciting food, money, and ale. 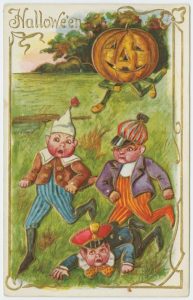 The “trick” part of trick or treating began with the Scottish and Irish tradition of “guising,” where, rather than vowing to pray for the dead, children sang, told jokes, or recited a poem in exchange for fruit, nuts, or coins, which, by the way, were the most hated Halloween treats in my bag. Reese’s or KitKats for me, please!

Trick or treating has since lost its appeal (well, maybe not for kids), as today’s parents are rightfully concerned about their children roaming the streets with potentially malicious folks handing out tainted treats. Today’s kids attend safe Halloween parties or community events.

But, we oldheads were lucky! We had trick-or-treating AND a party!

With a lit Marlboro in her mouth, Mom would tie our hands behind our backs and we would plunge our faces into a saliva-laden tub of water to bob for apples. Bacteria, schmacteria!

Moms, teachers, and scout leaders, alike, were big on tying our hands behind our backs and even blindfolding us at Halloween parties. Another game I remember, involved catching with our mouths a marshmallow suspended by a string while bound and blinded. Miraculously, we all lived to tell about it.

At our parties, we didn’t have string cheese sticks decorated as ghosts or a vegetable platter in the shape of a skeleton, served with mini bottles of water.

Our sugar-fueled festivities included cupcakes made with boxed cake mix (no doubt decorated with chemically-dyed icing and ever-so-nasty candy corn), washed down with gallons of the highest 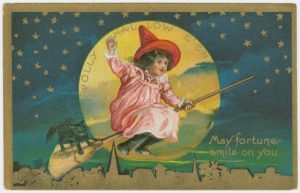 fructose corn syrup drinks available, like Hawaiian Punch and Ecto-Cooler. Oh yeah, and we didn’t recycle the containers they came in.

All of this nostalgia makes me wonder how these Halloween shenanigans came to be.

History.com tells us that Halloween likely began 2,000 years ago as the Celtic festival of Samhain (pronounced so-wen). The Celts celebrated the New Year on Nov. 1, so Oct. 31 was considered the end of the harvest season. This marked the beginning of the cold winter ahead, a time associated with death. Fun.

During the festival of Samhain, it was believed, ghouls roamed the earth. To avoid these haints, the Celts dressed up in furs and animal heads and burned stuff. These early costumes must have been much more dangerous than a plastic mask and a flammable vinyl clown costume. Plus, they probably smelled really bad. But, then again, the inside of a rubber mask is no spring bouquet.

By 1000 A.D., in Samhain tradition, people marked the All Souls’ Day celebration with bonfires. At that time, the costumes included angels, saints, and devils (oh my!). All Saints’ Day was known as All-hallows or All-hallowmas. The name came from the Middle English Alholowmesse, meaning All Saints’ Day (literally “All-hallowed Mass”). So, the night before was called All-Hallows’ Eve and then Halloween.

When the Romans came on the scene in 43 A.D., they added Feralia to the Celtic Samhain. Feralia was (wait for it…) a celebration of the dead. The Romans also added honoring the Goddess Pomona into the mix. Pomona’s symbol is an apple, which could explain the tradition of bobbing for apples. History.com adds that during the celebration, young unmarried people would try to bite into an apple that was floating in water or hanging from a string. The first person to bite into the apple would be next in line to marry.

The apple also played a part in another old-time Halloween tradition. Young unmarried girls would throw apple peels over their shoulders in hopes that the peels would fall in the shape of their future husband’s initials.

Another tale has it that young women who consumed a confectionary delight made of walnuts, hazelnuts, and nutmeg before bedtime on Halloween would have sweet dreams of their future husband.

I used to go to sleep with a stomach ache on Halloween night from consuming too many confectionary delights before bedtime.

The apple isn’t the only fruit tied to in the Halloween tradition. We also have the great pumpkin. We take a carving knife to its stem end; scoop out its guts; carve evil faces in it; and light up its body with a hot burning candle. Horrific.

Jack-o’-lanterns were not always carved from a pumpkin, however. History.com tells us that Jack-o’-lanterns began in Ireland as carved turnips or potatoes. Legend has it that some dude named 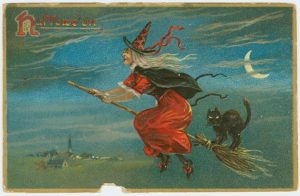 Stingy Jack made a deal with the devil and lost. The devil gave him a glowing piece of coal to find his way home, and the ever-so-resourceful Jack carved out a turnip to hold the glowing coal. Jack of the Lantern, still thought to roam the Earth, began carrying a carved pumpkin after lots of Irish folks (and, I suppose, Jack) moved to the U.S. during the potato famine.

As the owner of two black cats, I take any black cat Halloween/bad luck superstitions with a grain of salt (wait, isn’t THAT a superstition?) According to legend, black cats were really witches who turned themselves into cats to avoid being found out. One of my black cats once helped himself to a sealed can of catnip, and the other can’t resist chewing on plastic bags. I’m pretty confident they are not witches.

So, with all this Halloween knowledge under your belts, get yourself a carved turnip, throw on an animal pelt, and have a safe and happy Halloween.