Welcome back to the Holiday Preparation Toolkit! When we last left off, we were discussing ways to get your gift-wrapping out of the way in advance. The early birds started wrapping presents last week. However, there are still a few weeks between now and Thanksgiving, or the first of December. That’s when most folks start putting up holiday decorations, so be ready. You might ask what more you could possibly do to prepare so far in advance. However, once you’ve got the gifts taken care of, your next concern, before hanging the lights and picking the tree, should be placing orders for anything you need delivered prior to decorating.

What To Look For

Shipping times are speeding up in this day and age, with internet retailers rolling out same-day shipping in some areas. However, it’s not always possible to get your order shipped so quickly. You’ll probably still need a little forethought if you want your package of holiday supplies to arrive in time. USPS can ship a package to most zip codes in the country within five business days, but that means you need to wait at least a calendar week, plus lead time, for your holiday supplies, unless you’re willing to pay to expedite them.

However, it’s not going to be worthwhile to ship in just any old thing. Older-style ornaments can usually be found at brick-and-mortar stores, and shipping costs will tend to inflate prices, pushing affordable items into unaffordable territory. 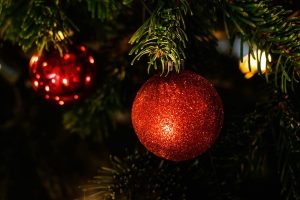 Since ball ornaments, personalized porcelain plaques, and glass icicles dominated the market up until just a few years ago, those holiday shop staples are hardly tough to come by. I don’t know about you, reader, but I have more baubles in storage than I know what to do with. If I’m going to be ordering something online this season, it’s going to be something new. There might seem to be nothing new under the sun, or under the Christmas tree, but you need to look no further than the front yard to identify the newest trends.

This is far from a controversial statement, but in recent years, decorations have become increasingly public and attention-grabbing. At the same time, the centerpiece of a festive house has shifted away from the fully-decked tree and toward the roof, the front windows, and even the lawn. A holiday that once took place among families, in circles around fires and evergreens, now takes place in full view of neighbors, passers-by, and eager spectators, who travel from house to house to see whose lights are the brightest and most spectacular. 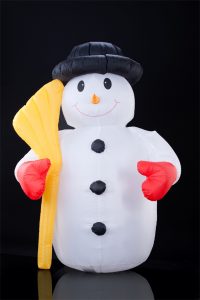 How, then, do you win the battle for the best decorations on the block? There are a few options if you want to bring some technology into the picture. The oldest form, at least by my estimation, is the inflatable yard decoration. You know these guys: nylon figures, inflated by the equivalent of a particularly quiet leaf blower, some in the form of Rudolph and company; others in the shape of the Big Man himself, Santa Claus. In any case, they’re usually tethered down and stuffed full of lights. 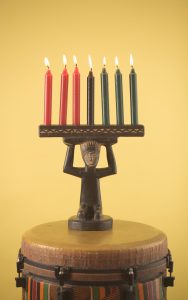 Inflatable decorations tend to show a bit of variety, so there are options for holidays besides Christmas. You can get an inflatable menorah, a star of David; even a Kwanzaa kinara, if you’re willing to dig around. For a non-denominational decoration, you can go with a snowman, a fir tree, or a massive snow globe with confetti inside.

The church behind my house actually has a giant, inflatable Star of Bethlehem that floats (I’m not kidding) at a height of several hundred feet directly above the manger in their Nativity scene, so that if you follow the star on foot, you eventually end up encountering actors dressed as Jesus, Mary, and Joseph. Seriously. With that in mind, I’d say the sky is your limit, but it’s actually incredibly ill-advised to fly a balloon within FAA-defined navigable airspace, so your limit is somewhere around 500 feet above the ground. Use it wisely.

Personally, I find inflatable decorations to be unbearably gaudy, and they’re hardly the newest trend. In fact, you can always find a handful of muddy, year-old inflatables in front yards on a given street. In spite of all their shortcomings, inflatable decorations can go on your roof or in the middle of an empty lawn, unlike most decorations. Because of that, they are uniquely useful for finishing off particularly busy holiday scenes. I wouldn’t use them as a centerpiece in my yard, but they can fill a lot of extra space at low cost. 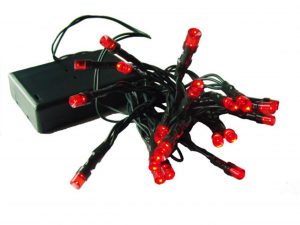 For something a little bit newer, you can go with unconventional lights. Battery-powered lights can reach tough spots where you’d prefer “wireless lights” (if they existed), and they can bridge gaps that your extension cords can’t. Icicle light strings can hang from your rooftop. They are great way to sell the illusion of a winter wonderland in a warm area. 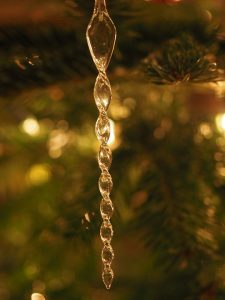 Putting lights inside other objects can make a nice effect. Garlands and wreaths will look better with strings of Christmas lights woven in. As mentioned above, most inflatable yard decorations contain a lamp to fill them with a bright glow after dark. You can also insert lights into translucent plastic decorations like snowmen, and glass decorations will glimmer and refract rays of light when lit from the rear.

My mother has a set of prized crystal icicles and other prisms that she hangs from her tree every year. Each one sits directly over the bulb of a Christmas light to cast rainbows across the room. Flex your creative muscle, and look around for some decorations that could really shine if they had better lighting. Old decorations can take on a new look if you do it right. 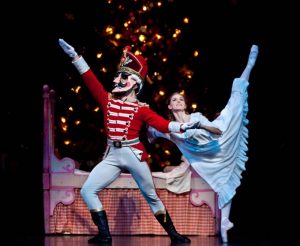 I also happen to absolutely love blue lights in place of ordinary white ones. It’s easier on the eyes, and at least to me, it evokes the mysterious, icy dreamworld of The Nutcracker: the Christmas ballet that I used to watch every year. They may make more intricate decorations nowadays, but there’s no beating the mystifying nostalgia of remembering my favorite winter traditions. You can do the same. Just think of something that used to widen your eyes, and try to capture that feeling in your home. 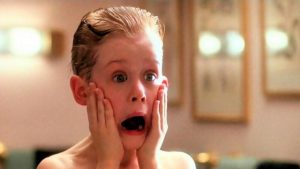 As a young blonde boy who was raised in the mid-90s, the John Hughes family holiday classic Home Alone was a constant presence in my life. I have been mistaken for Macaulay Culkin at least five times – legitimately mistaken for him – and I’ve been asked to put my hands on my face and scream in shock more times than that. The pattern continues. I cannot escape the comparisons.

One particular scene is seared into my mind. Kevin McAllister is home alone, and his house is in danger of being burglarized. Robbers have cased the McAllister home, intending to return the next night. To scare them off, Kevin covers up his windows and shines a bright light onto them. He places an elaborate rig in front of the windows. The rig moves a system of mannequins, casting shadows across the window. This gives the appearance that people are dancing around the house at a wild holiday party. At least temporarily, the scheme scares off the burglars.

It would be a waste of time to try to list all the inaccuracies and absurdities associated with this idea. It’s impossible. What would be more productive is to discuss how an ordinary person, as opposed to a destructive boy genius, could pull off an effect like this.


You can’t yet project a swingin’ dance party onto your windows, but you can put that empty space in your front windows to use, regardless. AtmosFX is a projection system that casts images against a screen that can be hung in front of windows and doors. We discussed the product on Come In, We’re Open before, but we only briefly mentioned the winter holiday applications. 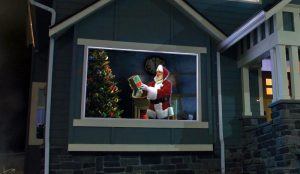 This year, your windows can play host to a series of holiday decoration scenes, like a roaring fireplace, blustery snow, New Year’s fireworks, a tip-toeing Saint Nick, or a stream of balloons and confetti. It may not fool burglars, but it will certainly amaze your neighbors. The set-up is incredibly easy to use – just turn it on and direct the light at a projection screen. With AtmosFX, you can dress the house up without spending too much time or energy on it.

In the future, more decoration scenes will be available from the supplier, and you can even hire them to develop a custom decoration for you, at a fairly steep price. It looks like Kevin is going to need to do more than scam a pizza delivery guy if he wants to use a projection instead of mannequins to set up his dance party scene.

In all, there’s a whole lot you can do to take your decoration game above and beyond the competition. However, you’re going to need to get on top of it early. Place your orders, get your fancy machines, and be ready to set up.

And – you know what? There’s more to decorating your house than finishing it early, or using the best technology. Pick a theme – get an idea of what you want your home to look like – and run with it. If it’s classy, imagine why it’s classy. Is it the velvet bows? The garland of holly? If it’s fun, why is it fun? Is it the inflatable team of reindeer? Is it the bright lights? If you think about the big picture, you can combine small pieces to really make the whole scene come together.

So now, you’ve got another tool in your toolbox. With great power comes great responsibility, but don’t worry. You’re ready for anything the future might throw at you.