“What should I write?” Conor asked.

It was mid-March, 1991. Conor was the son of the famed rock star, Eric “Slowhand” Clapton. Conor was living in New York at the time with his birth mother, Lori Del Santo, and according to Lori’s account in ABC, Conor asked for her help to write a letter to his father, who was living in London and coming to New York to visit a few days later. Though Lori and Eric were never married, they shared an increasingly close relationship after the birth of their son. Conor’s letter was meant to be waiting for Eric in London when he returned.

“Well, write ‘I love you, Dad’,” Lori told her son. Conor wrote just that and sent the letter on to England.

Days later, while the letter traveled to his flat in London, Eric arrived in New York. As he was preparing to head over to pick Conor up from the apartment and take him to the zoo, he received a frantic phone call from Lori. Writing in Vanity Fair, Eric described the shock he experienced that morning, the morning of March 20, 1991:

She was hysterical, screaming that Conor was dead. I thought to myself, This is ridiculous. How can he be dead? And I asked her the silliest question: “Are you sure?” […] I remember walking down Park Avenue, trying to convince myself that everything was really all right… as if anyone could make a mistake about something like that.

Eric rushed to Lori’s place in shock, trying to figure out what she could be talking about: 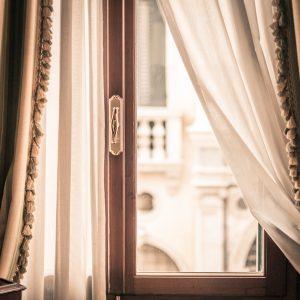 Casement window in an apartment building.

When I got near the apartment building, I saw a police line and paramedics on the street, and I walked past the scene, lacking the courage to go in. Finally, I went into the building, where I was asked a few questions by the police. I took the elevator upstairs to the apartment, which was on the 53rd floor. Lori was out of her mind and talking in a crazy way. By this time I had become very calm and detached. I had stepped back within myself and became one of those people who just attend to others.

The question on everyone’s minds was obvious: what happened? Eric’s initial reaction was shock. “He sat down very quietly. He was looking out the window, kind of guarding his thoughts,” Lori said in an interview with New York Daily News, “He didn’t say much… I couldn’t stop crying, but he was very cold.” According to his own account, Eric spoke with emergency responders to try to understand the situation:

By talking to the police and the doctors, I established what had happened without even having to go into the room. The main sitting room had windows along one side that went from floor to ceiling, and they could be tilted open for cleaning. […] On this morning the janitor was cleaning the windows and had temporarily left them open. Conor was racing about the apartment playing a game of hide-and-seek with his nanny, and while Lori was distracted by the janitor’s warning her about the danger, he simply ran into the room and straight out the window.

According to People, a superintendent named Peter Goyco heard Conor land on the roof of the building next door. Goyco went up onto the roof, expecting to find a fallen air conditioner, and discovered the boy, crumpled on the ground “like a doll” in his red pajamas, with no sign of trauma but a single drop of blood from his nose. The 49-floor fall killed Conor immediately.

Lori couldn’t bring herself to go down to the morgue, so Eric was the one to identify Conor’s body. He was deeply affected by the sight of his son, writing, “Whatever physical damage he had suffered in the fall, by the time I saw him they had restored his body to some normality. I remember looking at his beautiful face in repose and thinking, This isn’t my son. It looks a bit like him, but he’s gone. I went to see him again at the funeral home, to say good-bye and to apologize for not being a better father.”

The immediate police response was an investigation by the Health Department into New York City regulations requiring safety devices on windows. A police spokesman named Captain Stephen Davis told the New York Times that he believed the death was “a tragic accident,” and the investigation subsequently determined that condominiums had been exempted from the window safety requirement and condo owners were expected to install safety devices themselves.

In the meantime, Lori and Eric prepared for the funeral, each reacting in their own way. Lori fell into fits of emotionality and her family 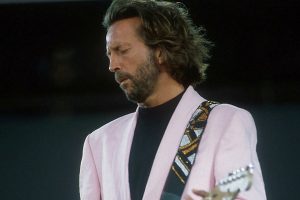 sobbed at the viewing, according to Eric. Eric, a recovering drug user, remained silent. The death of Conor, he told Rolling Stone, led him “the other way” compared to Lori.

“It’s funny,” Eric said, “but I didn’t really feel anything. I went blank. As Lori has observed, I just turned to stone, and I wanted to get away from everybody.” The already-reclusive Eric grew increasingly distant from the woman he once dreamed of raising a son with.

“He doesn’t do anything ever…. You have to wait in the shadow and be there somehow, and understand his world. He has this very personal world,” Lori said, explaining in NY Daily News why their relationship subsequently ended.

“One day he told me, ‘Talk only when I ask you a question. Otherwise, no.’”

A few days later, Lori and Eric took Conor’s coffin back to England with family and friends. Conor was buried in a cemetery in England, where Eric lives and hopes someday to finally rest, according to Lori.

“Eric said he was going to be buried there, near the baby. That’s where he wants to be,” Lori said.

A wall of nearly fifty reporters and photographers greeted the rock star as he left his son’s funeral. Commenters in the media criticized the opportunistic paparazzi who showed up, but Eric was too distracted to care, saying in his Vanity Fair testimonial, “The curious thing is, while a lot of other people were very upset and insulted, because they considered this a lack of respect, it didn’t impinge on my own grief in any way. I just didn’t care. All I wanted was for it to be over.” 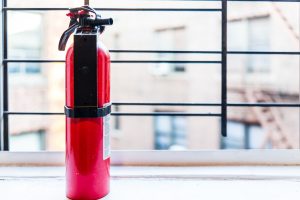 After the funeral, Eric returned to his London apartment and checked the post. Among the bills and junk mail, Eric found one letter, addressed to himself, sent from New York – and signed by Conor. As Lori looked on, Eric opened Conor’s letter from beyond the grave and read it: “I love you, Dad.”

The letter from Conor was sandwiched between dozens of other letters from people across the world, both famous and anonymous. Eric wrote of this positive response, “There were thousands of letters of condolence for me to read, written from all over the world, from friends, from strangers, from people like Prince Charles and the Kennedys. I was amazed. One of the first I opened was from Keith Richards. It simply said, ‘If there’s anything I can do, just let me know.’ I’ll always be grateful for that.”

Eric eventually revealed his emotions and wrote a song, “Tears In Heaven,” about his loss, asking Conor in the first line, “Would you know my name if I saw you in heaven?” Lori considers the song to be the first step Eric took toward opening up, telling NY Daily News, “He lives in silence [and then one day] he does something [like writing the song], and that’s his present forever.” In an interview with Lisa Sewards, Lori admitted that she has never heard the song in full, because she finds it too painful to listen to. “I cried every day for four years, and there’s not a day goes by when I don’t think [about], talk to, or pray for Conor,” she said. 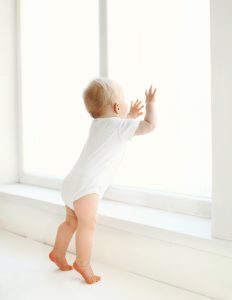 A young child peering out of a window.

Lori still thinks of her son fondly, saying to NY Daily News, “He was an angel, I think.” In a surreal anecdote, she recalled the moment in the apartment when she realized Conor was gone: “As soon as I entered the room and I saw the window, [I asked myself] where can he be? In the sky, obviously – paradise, hopefully.”

Eric has stated that he tries to find the positive side of the response to his son’s death. “For such a small young man, he had this incredible impact. He was famous overnight,” Eric told Rolling Stone. He has since worked to inform the public about the danger that open windows can pose to children.

According to the Safe Kids Worldwide 2015 Report to the Nation, about eight children under age 5 fall to their death from a window every year. Falls from windows injure an additional three thousand children a year, as well. The Window Safety Task Force offers window safety tips including:

Eric told ABC that despite the tragedy, he was thankful for the increased awareness brought to children’s safety by Conor’s death. Tellingly, Eric once summed his firsthand knowledge up in a somber public service announcement: “Use guards on windows and safety gates on stairs. It’s easy, and it could prevent a terrible tragedy. Believe me, I know.”