I just wanted to open the patio door at my family’s rented shore house, but it wouldn’t budge. It led out onto a deck that faced starboard and sat one block from the beach.

Have you ever done that thing, where you try to open an unlocked door and fail, then re-lock the door, then try again, and fail again? I did that thing. The door moved just as easily while locked as it did while unlocked. I re-unlocked it.

Now, I don’t weigh much. I probably weigh about six stone while soaking wet and holding dumbbells. It took every pound, minus the water and the dumbbells, to pull the door open like Indiana Jones pushing aside a boulder to unseal a tomb.

I thought to myself, “Renting doesn’t have to be this difficult.”

With the summer season ending, many owners of rental homes will be returning to their properties to survey the damage done to the doors and windows by tenants like me. For owners who do not often stay or live at their property, it can be really hard to notice the things that your renters will notice. You don’t use that inconvenient window in the back room. You don’t touch that empty cabinet. Your renter absolutely will, and that is when they will notice disrepair that slipped past you.

To get your property back in perfect shape, follow my example. Take a close look at your household hardware when you return home.

I was only looking to let the night-time land breeze chase the A/C out of my room. My family had the air conditioner set below 70 degrees, whereas I prefer to sleep in high heat, frankly. I wanted all the windows open and the door thrown wide, to let in the salty mist and keep me toasty beneath my blanket.

Prying open the patio door, I could see rust caked onto the metal track that the door panel slides along. That’s to be expected at a shore house in Sea Isle City, New Jersey, where there are big variations in temperature and humidity, and corrosive salt in the air. The property owner was probably blindsided by how quickly the track wore out on what looked like relatively new doors. It’s a difficult part to replace, too, so I can understand the hesitance.

As a SWISCO employee, I have a strange view of doors and windows. You know that “car guy” friend, who feels compelled to identify every car that you pass on the road? We do that with windows. If you invite a SWISCO employee to your house, we will look at your doors. We will look at your shower hardware. We will probably disassemble a window or two. We have a curiosity that only comes from immersing yourself in an industry. Bored, I decided to take a deep dive into the hardware at the shore house. 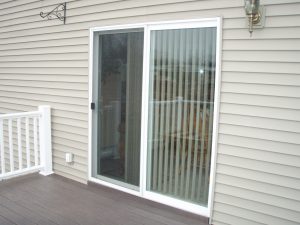 Inspecting the patio door itself, I found a number of different tags and stickers on the frame, but I knew most of them wouldn’t help. However, I still pored over them for manufacturer information. Most of the tags were re-seller or installer tags, put on the window to keep track of inventory. The door was missing the metallic AAMA (American Architectural Manufacturers’ Association) and NFRC (National Fenestration Rating Council) stickers that sometimes mark the manufacturer of a door.

Eventually, I got lucky, and my curiosity was sated. I found a manufacturer code on one of the re-sale tags: “SIL.” Looking this up on the AAMA site, it revealed that these doors were from the Silver Line by Andersen Windows. It’s surprising that such nice doors wore down so quickly. That just goes to show how harmful a beach environment is for doors and windows. By contrast, the Therma-Tru privacy doors inside the house opened and closed as smoothly as you could want. Tugging too much at a handle to get the door open is a recipe for tearing the handle right off eventually. It’s best to get the door sliding properly before other problems arise.

What our vacation host really ought to have done is remove the door, replace the metal part of the track, clean the track channel, lubricate the rollers, and put the door back up. Sometimes a roller wears out and drags, so the property owner might need to replace the rollers, too. On such a new door, though, it’s more likely that the rollers just need to be adjusted via their adjusting screw, to level the door. 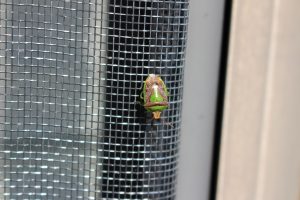 A patio screen door with an insect on it.

The solution there would be to take the screen door out of the frame, clean the track, check the screen rollers, and consider replacing the rollers or track if they do not work. The rollers can be lubricated, as well, and some can be adjusted.

As I toyed with the screen door, a salty gust whipped through the screening mesh. The wind whistled away through a window on the far side of the room.

I directed my attention to the window.

The first thing I did was pull it open to inspect the frame. I wanted to know the manufacturer. Sure enough, I found a “SIL” marking on a sticker to indicate that this was also a Silver Line window. I knew that Silver Line windows don’t use the convenient Narroline balance boxes that are common on wood Andersen windows, so I was curious what kind of hardware was used. The Narroline balance boxes operate smoothly and evenly, and they are easy to identify by the printed code on the box. Other balances… not so much.

I decided to tilt open the window and inspect it. 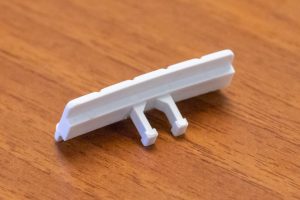 A finger lever tilt latch from a hung window.

The tilt latches, which sit on the top left and right side of the window sash, keep the window from tilting out of the upright position. On this particular window, there were internal thumb levers — and flimsy ones, at that.

These thumb levers are real trouble. They fit inside the sash in a precise fashion so that only an exact replacement will do. They snap off easily, too. There’s nothing you can do while the latches are unbroken, really. However, once they go, there’s an interesting fix that the owner of my rental could have tried. The owner could have simply drilled new holes into the sash and placed a “surface-mounted” tilt latch over top of the old slot, as if the flimsy little thumb lever were never there.

I disengaged the latches and tilted the window toward me. It’s not my window, so I didn’t wipe it off at that time, but whenever you tilt your window in, you can always take a second to clean it.

Raising the sash, it struck me how rickety it was. A relatively thin plastic shoe, wedged in place, held the sash into the window jamb. The shoe rocked back and forth as I wiggled the sash, tied to a nylon cord that unraveled from inside a tilt window channel balance. The metal channel sat fixed to the side of the window sash, with a calibrated spring and cord inside to suspend the sash. I stopped wiggling the sash for fear of breaking the cable or shoe. Tilt channel balances can be very annoying when a small component breaks. You usually need to buy the whole thing to solve the problem.

On the window itself, the metal channel balance was printed with a code known as a “stamp option,” but I didn’t pay it any mind, because the stamp isn’t used to identify the balance. Based on appearance, I recognized the ribbed channel and shoe as being parts from the SWISCO Series 751 balance. The balances were fine, though. Rickety as it was, the balance setup was meant to function that way. There was no need to replace it and no benefit in doing so.

Fluttering around the house, I discovered that almost all the windows in the building were identical. There was, however, an awning window in each bathroom. They were the type of crank-out window that you often see inside of a shower. I don’t really know why anyone would want a window inside the shower, above the tub, but they’re almost ubiquitous in some types of homes.

An awning window leading out of a bathroom.

The operator box that cranks the window was laying flat against the sill, but the crank handle was dangling out into the shower. Later that day, washing myself off, I had to meticulously dodge the handle with my elbows as I lathered soap.

My host could have easily substituted the long “low profile” handle for a T-shaped “butterfly style” handle. It would have stuck out less and stayed out of the water, out of the way of renters’ tender elbows.

Finally, I did a once-over through the house to see if there was any miscellaneous hardware that I could identify. The showers used shower curtains (no hardware there) and the interior door hardware looked unfamiliar. The last thing I did before deciding to try to find a hobby was check out the cabinets. They were all in good shape, with conventional hinges, except for the lazy susan on the corner.

The lazy susan was affixed with five-inch long hinges with three or four arms in a complex web. I’ve never seen a hinge like that before, and the reality is, the property owner will probably never see a hinge like that again. Maybe it works really well, but that design is almost certainly unique to the furniture supplier and not available to replacement part manufacturers. Once that crazy hinge bites the dust, you’re replacing the whole cabinet door, and maybe even the whole cabinet set, if you can’t make the finish match.

There’s not really a fix for my dear host here. The only option is to leave the hinges on until they break, then seek a replacement or a substitute. A furniture repair company would be well-equipped to try to help, but the hinge might not be available when the time comes. When purchasing doors, windows, or storage units, it’s important to consider whether the hardware is easily replaceable. That will ultimately determine the life cycle of your product.

Now, as I said, it wasn’t my house, so I stopped short of making any repairs. Still, I was prepared enough to get started if I had wanted to fix anything.

I could have written out a short list of parts and fixed up the house. People are often surprised to find that they can fix problems like this with the operation of a door, but they absolutely can. All it takes is a little know-how and the right parts.

Next time you return to your vacation property to find damage, don’t panic. See if you can repair the hardware. You can avoid replacing all kinds of things inside your house if you just commit to trying to repair them.