My first exposure to the concept of living in a space slightly smaller than my current living room was through buzzfeed, as I’m sure was the case for many people. Tiny houses have been a major hit among environmentalists, potential homeowners on a budget and millennial’s alike over the last few years. Many saw it as a challenge to determine who had the daring and organizational skills to face living in a “tiny house”. Living in a space that small is challenging to even imagine. Where would I put my countless pairs of shoes? What do men do when the greatly sought after “man cave” turns into a corner?

Living in a tiny house seems like a major commitment. Much more than I’d be willing to take on blindly as a future homeowner. Luckily, there are some possible solutions! Companies like Airbnb allow anyone interested in alternative types of living situations to try it out and decide if it’s right for them before taking a major leap. The real question is, can a few days or a week really prepare you for that kind of extreme life change? Staying in an Airbnb tiny house for a few days might be a good introduction to downsizing, but it’s also a home that’s set up to accommodate the owners lifestyle. A few days might also not be enough to determine how long you would be comfortable living in a similar space.

After an accidental Google search, I stumbled across another option with a longer trial period; micro apartments! A micro apartment is a one-room, self-contained living space that is designed to accommodate a living space, sleeping area, bathroom, and kitchenette with 50–350 sq. ft. I prefer the idea of getting to try tiny living during a 6-12 month lease without the commitment of buying a home.

Are you Ready for Tiny Living?

Recently, fascination has spiked overseeing people try, and often fail, to live in a quarter of the space that they’re used to with even less of their belongings to keep them occupied. What’s shown less often is the reality of people who are living their lives in inconceivably small spaces and, believe it or not, loving it!

Most of the people that I’ve encountered during my research into the reality of tiny living agree that it’s definitely not for everyone, but the people who find that the lifestyle is right for them to experience a new sense of freedom and less connection to frivolous possessions. To me, it sounds like a similar feeling that people experience when they go camping to “get back to nature”. In the case of tiny living, it seems like limiting their belongings and financial responsibilities let them get back to what they love to do without worrying about all of the responsibilities associated with maintaining a larger residence. 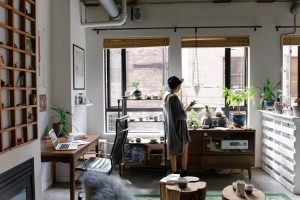 “What everyone who is considering going tiny needs to do first, before even getting rid of stuff, is to know your “why”. For some people, it’s to save money, have a smaller carbon footprint, want to pay off debt, travel, etc.  For me, it was to finish writing my book about my grandfather.” Because of her decision to downsize, Felice Cohen was able to live the life she wanted, as well as sell 30,000 copies of a book that she never thought she’d profit from.

If having lots of guests over is an important part of your life, tiny living may not be conducive to your lifestyle. According to Stacy Caprio, residing in a 593 sq.ft. apartment, where your bedroom is also the kitchen, can make entertaining guests difficult.

Aside from having a far smaller maximum capacity for your living space, limiting the number of appliances is important to make the most of a smaller space. People are often forced to put appliances under beds, on shelves, or oftentimes extra items wind up inside the stove if there’s room for such a large appliance. Another obstacle is to order measured furniture that’ll fit into a specific space and make it livable, according to Bryan Stoddard with Homewaresinsider.com.

Downsizing your life to fit into a fraction of the space you’re used to can be intimidating, to say the least. Renting a storage unit for extra belongings can be a good place to start but you may not need it for the long haul. 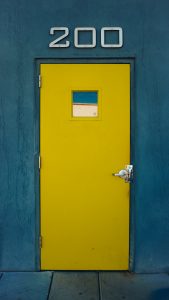 “I had inventoried all my boxes I’d put in storage in case during that year I needed something so that I could find it, but I never did. Out of sight is really out of mind,” Cohen said.

It’s also important to remember that living small doesn’t necessarily mean living without. It is completely within the realm of possibility to hold on to your important, and ideally smaller, possessions. The key to tackling this part of transitioning into a smaller space, which is arguably the hardest part, is to take the process one step at a time. Start by sorting through your things and donating or giving away the things that you don’t use and probably won’t miss.

Over five years of living in a tiny 90 sq. ft. apartment in New York City, Cohen managed to rid herself of over 70 boxes that she had in storage from her previous living situation.

An important thing to keep in mind to hold off any impending hysterics is that we acquire a lot of “stuff” in our daily lives, most of which we don’t need or even necessarily want. We collect belongings because we can and we have the room for them, or convince ourselves that we can make room. Downsizing means that you need to reprogram the way we think about what’s important and what falls under the category of “extra junk”. If you’re looking at something and are unsure about which category to put it in, it’s probably nice junk, but junk nonetheless.

The answer to living in tiny spaces is modularity. The small living area and what you choose to put in it have to be dense with different functions. It also helps to incorporate simplicity so that everything is easily accessed and out of the way when needed.

There are various ways to make tiny living a homey and welcoming experience instead of an organizational nightmare. One of the most influential is the furniture that you use. Moving the same furniture that you are using in a standard 800 sq. ft. apartment into a 100 sq. ft. micro-apartment is bound to become a nightmare with no floor space and clothes hanging from every available surface. 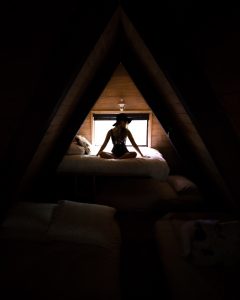 The good news is that the more popular downsizing becomes, the more options there are for space-saving furniture. Though this may initially feel like another expense among the many associated with moving, choosing the right furniture for your space will make the difference between comfortable organization and impending insanity.

According to Stoddard, tiny apartment spaces don’t often allow for generic and industrial furniture that we all love. Your options become limited to measured furniture that’ll fit into space and make it livable. Custom-made furniture can be the secret to fitting an eclectic life into a small space. Wardrobes, for instance, can function as a dressing room or a rack for drying damp clothes. Also stacking small boxes, drawers, or baskets to hold all of the knick-knacks and small appliances that clutter everyone’s living spaces can help cut down on wasted space. 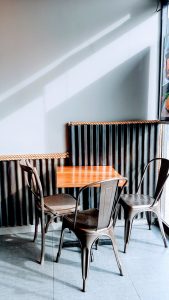 The trick to successfully furnishing a small space is to choose furniture that either extends upward or can be somehow mounted to a wall or door. A few examples that are shown in the tour of Cohen’s tiny space include a loft bed to preserve floor space, as well as shelving and hooks that can be used to keep things off the floor and preserve precious storage space for larger items.

Another important aspect to maximizing the amount of space you have is utilizing natural light. Windows are a great way to help your space appear open and less constricting on a sunny day. Using Mirrors and light-colored paint on walls can also create the illusion of a larger space. This is bound to be a highlight for anyone interested in interior design or who likes to switch up their living space on a regular basis. Not only do you have the freedom to paint the walls in most apartments (but be sure to check with the landlord before tackling the project) but you can change the wall colors and decor as often as you’d like since there’s such a small space to deal with.

Moving into a smaller space could exponentially reduce the cost of living according to some people residing in tiny apartments and houses such as Cohen, who spent $700 per month on a 90 sq. ft. apartment in the Upper West Side of NYC. $700 may sound like a lot for such a small space to some people, myself included. Taking into account the location and prices of average apartments in the area; It’s hard to doubt that those are monumental savings. For example, an apartment in Manhattan can range between $2,000 and $6,000 per month as of 2018. Considering the average size for an apartment in the area is only 703 sq.ft., it’s obvious why some people would choose to downsize.

The amount that you save by downsizing depends on the cost of living and whether you’re living in a city or suburban area. Cities are ideal for smaller living spaces since there is limited space to expand housing. Cities would want to promote people living in smaller spaces by reducing cost so that they can fit more tenants into each building. Suburbs normally have plenty of space to build and have more houses than apartments, so downsizing isn’t quite as popular since the cost of living is more reasonable and there is enough room for everyone to live in whatever size house or apartment that they choose.

Though the price cut on rent is enticing, It may not be worth the extra inconvenience and outside expenses for some people.

“It might seem like a great reality to live a minimalist life, but what happens when you really do need a washer and dryer in home,” said Katie Ziskind. “You end up spending extra money going to the laundry mat when you could just have a nice size house that has a dishwasher, washer and dryer, and all of the space that you need for a growing family.”

It seems as though the money-saving aspect of tiny living depends on the priorities of an individual’s lifestyle. It’s all about give and take. While it’s possible that missing out on certain household appliances will make it seem like there are more external costs, those funds are just being shifted from the higher rent and utilities that people are used to paying to other smaller expenses. 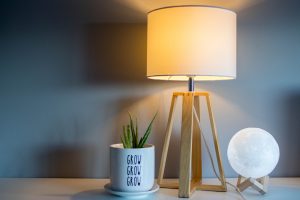 “First of all, your utility bills will be considerably reduced,” said Matthias Alleckna, with EnergyRates.ca. “The fewer rooms in a home, the lower your energy bills. You will need less time to heat or cool your apartment, and won’t have enough space to fill your home with energy-consuming appliances and devices.

Every decision in life has its pros and cons. Choosing the right living situation is no exception. What’s important is making sure that the home fits your lifestyle. If you like to travel, dislike clutter, and have above-average organizational skills, tiny living may be a good option to save money for other endeavors or for a lifetime of freedom.